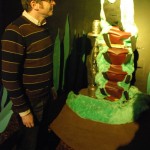 talking to the caterpillar

From the narrative of Alice’s Adventures in Wonderland, we chose six stages, each represents a chapter or part of it, and built one of the world biggest mixed reality installation. From start to end the user undergoes immersion that consists of real and nature mimicking, virtual and augmented reality in such situations which demands the user to question him/her self and their logic and Western reasoning. A new form of presence and user experience will emerge!

With this installation we are exploring a new application of virtual and augmented reality for a novel direction in human-computer interaction named ‘cultural computing’, which aims to provide a new medium for cultural translation and unconscious metamorphosis. 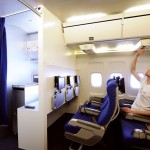 The Flight Simulator Laboratory is a testbed built to simulate the business and economy class cabins of an average airplane. Six economy class seats, one business class seat, a small kitchen facility and a toilet are available. The testbed is located in HG 2.29, and has a total size of 10 x 6 x 7 meters.

It allows simulation of long-haul flights to investigate empirically the reaction of different types of passengers in relation to new types of adaptive products and services (e.g. bio-signal based stress monitoring, changes of bio-clock etc.) related to the ‘aware environments’ and ‘adaptive systems’ research lines. 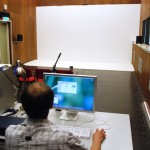 The Interactive Vision Studio allows research into human movement. It enables users to interact with recorded ‘copies’ of themselves, thereby allowing investigation of how users adapt to these artificial copies. Users can interact with their alter egos, in particular within the framework of performances.
A single camera and projector are used, eliminating the need to align and synchronize multiple screens and cameras. Both the camera and the projector have a resolution of 1920 x 1080 pixels.

The Interactive Vision Studio is located in a former server room with soundproof walls and only small windows that can easily be darkened, as well as a 7.1 surround sound system. Each of the eight audio channels can be controlled separately through the computer, allowing sonification of users’ movements. The first project realized in the studio is an interactive visual canon platform.

This supports the creation of visual canons, and allows them to be extended in real time. Actors can create visual canons by themselves. Lifting the reliance on other actors considerably shortens the iterative cycles in the design of a visual canon. The Interactive Vision Studio has an area of 72 square meters and a volume of 432 cubic.